The 10 most famous Barbie dolls include some iconic looks and a few controversial toys. Perhaps one of your favorites is on this list.

This is the doll that started it all. When the tall, thin teen model appeared in toy stores in her bathing suit and high heels in 1959, few beyond her creator would have predicted how Barbie would influence the cultural landscape.

The American Girl Barbie was introduced in 1965. Her most striking feature was her new bob haircut, available in platinum, blonde, ash blonde, titian, and brunette. She was also the first Barbie to feature bendable legs.

Twist 'N Turn Barbie appeared in 1967 and heralded Barbie's introduction to the mod era. The new doll design softened the look of the original, with rooted eyelashes, more natural makeup and long, straight hair. Her name references the doll's increased flexibility. It was introduced with a trade-in program, which allowed girls to purchase Twist 'N Turn Barbie at a discount if they turned in their old Barbie. 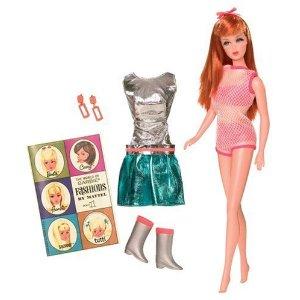 1971's Malibu Barbie is another memorable doll. Her tanned skin and light blonde hair made her the ultimate California girl. New Malibu Barbie lines have appeared over the years, and she also led the way for other swimsuit designs, such as Tropical Barbie in the 1980s.

In 1977, Superstar Barbie introduced the world to the modern Barbie face, wide-eyed and with a sparkling smile. Ken and Christie also got in on the redesign.

Released in 1980, the first Black Barbie removed the diversity of the doll line from the sidelines (such as Barbie's friend Christie) and gave more girls a Barbie who looked like them.

Dolls of the World

Although not a single doll, the Dolls of the World line that began in 1980 has enjoyed staying power and fans that cross generations. Countries as diverse as Australia, Brazil and Ghana have seen Barbie dressed in their traditional clothing, and the Dolls of the World now include the Princess Collection and the Landmark Collection. In honor of the line's 30th anniversary, there was even a special display of the dolls at Ellis Island in the summer of 2010.

The first Bob Mackie Barbie was released in 1990, wearing a sequin-encrusted skirt and a beaded bodice. She was not only the beginning of a successful Bob Mackie series, but she also paved the way for other designers to bring their signature styles to Barbie. Top names like Byron Lars, Donna Karen, Todd Oldham, and many others have since dressed the fashion doll.

1992's Teen Talk Barbie is one of the 10 most famous Barbie dolls because of a single sentence. When the talking doll commiserated with young girls about how hard math class could be, she drew the ire of groups like the American Association of University Women. "Math class is tough!" was soon removed from the doll's conversation options.

Barbie's friend Midge married her boyfriend Alan in a 1991 doll set, and in 2003 they reappeared in the Happy Family line. Midge was pregnant, and the doll featured a detachable stomach with baby inside. However, this doll proved controversial because some thought that it would encourage teen pregnancy. Early versions of the doll did not come with a wedding ring, which further fueled the protests about whether the toy was appropriate.

With Barbie still in production and enjoyed by children and collectors around the world, there are sure to be even more famous and memorable Barbies yet to come. Maybe now is the right time to start your own collection.