If your little girl loves Barbie and being in the great outdoors, a Barbie camper is the perfect toy for her. Who wouldn't love to go camping in a striking pink camper designed with all the luxuries of home?

About the Barbie Camper

Introduced in 1970, the Barbie camper by Mattel is one of the most popular Barbie accessories of all time. It allows girls to pretend they are camping with none other than their best friend, Barbie! The camper was the first Barbie toy that girls played with outdoors. Popular for its time, this toy showed them that women can be independent and take care of themselves even while camping, which was a big deal at that time.

Barbie's camper has changed in both color and design through the years. Vintage styles include: 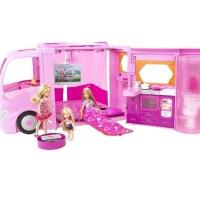 The latest vehicle in Barbie's family of toy RVs is the Barbie Pink World Glamour Camper, which was introduced in 2009. It is touted as the largest and most glamorous camper ever. Besides being trademark pink, the vehicle comes with more than 30 accessories including:

The camper folds nicely for storage and is mobile on its four wheels. There's even room in the cab for a driver and passenger.

The Barbie Pink World Glamour Camper is ideal for children ages three and older because of the small parts that are included. The camper itself:

Unless you already own a Barbie camper, you will have a hard time finding most of the aforementioned toys, except for maybe the Barbie Pink World Glamour Camper, which as of 2010, was still in circulation. Online, it can be found at:

However, many vintage toy collectors sell one or more of these older campers, but at competitive prices. All of these vintage campers are rare, and the older the model, the harder it is to find, especially in new or slightly used condition. However, if you look online, there are a few places that sell them:

Garage sales and thrift stores are two other places to look for Barbie campers. Most people don't think to keep their children's older toys so they either get rid of them or sell them in a yard sale. While you may not find one in mint or new condition, you will be able to get one for a bargain.

Since 1959, Barbie and all of her accessories have been some of the most popular toys for young girls. It doesn't matter if you are a collector or a parent, a Barbie camper is just one of those items you should have in your or your child's toy collection.