If you are new to the world of Meccano Erector kits, knowing which one to buy can be a little overwhelming. If your child is interested in construction or engineering, it's worth the effort to find a set because, like other building toys, these kits encourage creativity and independent thinking. When purchasing a kit a general rule of thumb is that models with fewer parts will be more appropriate for younger children.

For the youngest age group, five and older, Erector offers two types of kits: Toolbox and Bucket. Of the two, the Toolbox line is the easiest for small hands.

This model line mostly features construction vehicles. It includes cranes, front end loaders and excavators. But the company recently expanded the line to include 'off-road' type vehicles. These toys are designed for children eight years and older and the remote control options do require batteries. 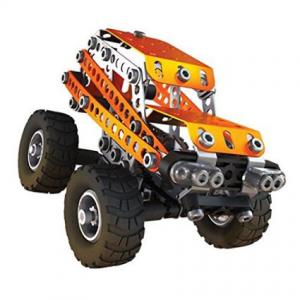 Designed for children 8 years and older, these kits can be built into three or more models. This wide-ranging category has some kits that are extremely basic, called starter kits. For example, the Drone, which has 43 pieces, doesn't 'do' anything and doesn't really resemble a drone all that much either. Some examples of better sets include:

The Turbo line is for children age eight and older who want to build their own radio-controlled vehicles, so this line deals exclusively with motor-driven models. Most Turbo models require four to six AA batteries and one 9V battery. 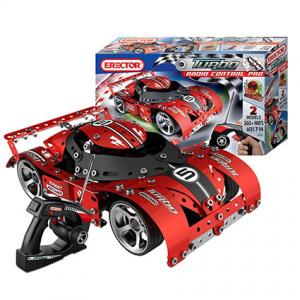 Don't let the odd-sounding name fool you - it comes from the official company name, Meccano-Erector. This line of Robots combines mechanical systems with computer-based technology. The are two styles available: a 2-foot and a 4-foot tall model.

Both robots are constructed out of high-impact polycarbonate and have:

The two Meccanoid styles, which can be built into a variety of different forms, are:

Both robot models interact with smart phones or other smart devices and can be programmed through:

This small product line is good for children interested in architecture. All Special Edition models are for children eight years or older. 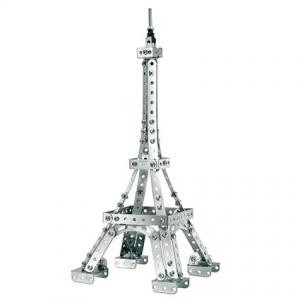 Erector Sets have a long history, beginning as an American-made toy. Albert Carlton Gilbert originally invented the building sets for children in 1911, and The AC Gilbert Company released them to the market in 1913.

The realistic construction toy was inspired by real construction sites from across the country in the early 20th century. AC Gilbert was motivated by New York City, which at the time had several large buildings under construction. He decided to create realistic components including metal beams with holes, pulleys, bolts and screws. The kits have been in production ever since.

The Meccano erector kits were initially produced in England, and the company was Gilbert's greatest competition. Gilbert purchased the Meccano factory located in New Jersey in 1929. The company went out of business in 1966, two years after its founder's death. In 1990, Miro-Meccano bought the rights to the Erector name, and new sets began to develop.

Individuals interested in the early designs can join the AC Gilbert Heritage Society for $25 annually and have access to member-only content like galleries and instructions for those earlier models. Early or discontinued models can often be purchased on online auction sites like eBay.

Over the years, all of these kits have been designed in such a way that builders can abandon the instructions and create their own vehicles (or in the early models, buildings). To encourage this, Erector hosts a community page which allows users to submit their own builds or view the creations of fellow enthusiasts. Younger children should get permission from parents before visiting the page, though, since some of the links are off-site.