The history of Mr. Potato Head is a very interesting one. Not only was this toy the first one to be advertised on television, but it was also featured in the popular Toy Story films.

The History of Mr. Potato Head

George Lerner, a toy inventor from Brooklyn, created Mr. Potato Head. The year was 1949, and he came up with the idea of taking facial features and body parts and inserting them into vegetables and fruits to make a face. Lerner's earliest versions included potatoes taken from his mother's garden. He would use other fruits and vegetables to make dolls for his younger sisters to play with.

Little Interest at the Start

The idea of using food as toys didn't prove to be a very popular one. Americans remembered the rationing of food and other materials during World War II and the idea didn't catch on. Toy manufacturers considered it a waste of resources, and rejected the idea outright.

Eventually, Lerner managed to persuade a cereal company to include his toy as the prize in their products. He sold the rights to the idea for $5,000, which was a considerable amount of money at the time.

In 1951, Lerner showed his idea to Henry and Merrill Hassenfeld, who were operating a business selling school supplies and toys. Their venture is known as Hasbro today. The Hassenfeld brothers were interested in the toy, and paid the cereal company $2,000 to stop putting it in their products. They also paid $5,000 for the rights to it. Lerner was paid $500 in advance and received five percent of sales.

The new toy went into production and was officially "born" on May 1, 1952. Mr. Potato Head was offered to the public for $0.98. The first version available for sale contained the following pieces:

This version of the toy didn't include a body. The buyer would have to provide the potato for children to play with. The new toy was an instant hit with children, and the television ads started in 1952 helped to boost sales to over one million units in the first year. 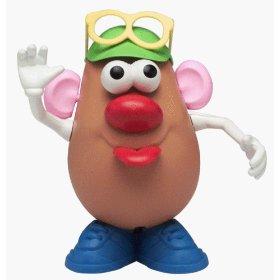 Mr. Potato Head has worn many faces over the years.

Mrs. Potato Head was added to this toy line in 1953. The Potato Head family expanded to include Brother Spud and Sister Yam shortly afterward. In the 1950s, customers buying the Mr. Potato Head kit could also get these accessories to complement their purchase:

Pets, known as "Spud-ettes" were also offered. A plastic potato for children to stick the facial features into was added to the kit in 1964.

In 1975, the potato portion of Mr. Potato Head was made larger. The facial features and accessories increased in size to complement it. This step made the toy safe for younger children to play with, in compliance with safety regulations introduced by the government at that time. Flat slats were added to the design so that children couldn't put the pieces on the potato in the wrong position.

The next major development in the history of Mr. Potato Head took place in the 1980s. Hasbro reduced the number of accessories, and round holes once again became the norm for this toy.

Mr. Potato Head is still very much a part of popular culture. The rundown on his achievements is as follows:

Mr. Potato Head is a toy that many people remember enjoying as a child. He continues to delight children today.