Any girl who wants to pair her Barbie doll up with a date knows she can always turn to the Ken doll. With his six-pack abs, perfectly-styled hair and stylish clothes, Ken is the perfect complement to the beautiful Barbie. Whether you prefer Malibu Ken, in his trunks and sunglasses, or Biker Ken, with his leather duds and scruffy face, there is a Ken doll to fit your dreams.

Ken has undergone several changes over the years since first being introduced in 1961 by Mattel. As with Barbie's history, the Ken doll has held a huge number of occupations; he's also been a blond and a brunette. The earliest Ken had felt hair, but it was soon replaced with molded plastic. He also went from being designed with straight, unbendable legs to legs that bent at the knees, making it easier to pose him in sitting positions.

Anyone who knows basic Barbie history facts knows that Ken is her boyfriend. However, when they split in 2004 it was big news. It was reported in 2006 that the couple had reconciled after Ken was revamped, but if Barbie and Ken are anything like most celebrity couples, who knows how long their romance will last?

The Many Looks of the Ken Doll

The 1961 Ken was a clean-cut, blond-haired, blue-eyed doll. Although some of his looks have been flamboyant Ken remains a beloved childhood toy for many girls. Even though Ken is a male doll, he remains a popular girls' toy. After all, when girls want to marry off their Barbie dolls, they need a suitable male figure to be the groom.

If you are willing to pay, you can find many of Ken's classic looks through online auction sites including some of these popular Ken dolls: 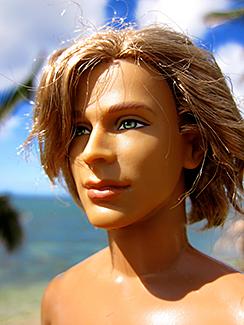 Ken has undergone a transformation and is now hipper and more good-looking than ever. 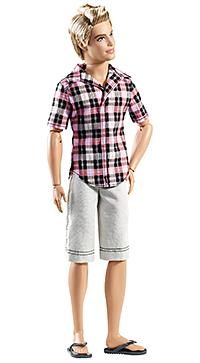 Fashionista Ken is a line of Ken dolls dressed in the latest fashions. Each year, the different Kens in the line are decked out in different clothes. You can also buy Fashionista clothes separately. Included in the fashionista line are:

Sweet Talking Ken makes the perfect boyfriend because he only says what you tell him too. He has a microphone built into his chest so you can record phrases, then customize the pitch when you play them back.

Shaving Fun Ken needs a shave and girls can actually shave him. He comes with a sponge-head razor which, when dipped in warm water, shaves him clean. With cold water, his beard comes back.

Groom Ken is ready for his wedding day. His look is regularly updated, sometimes featuring a white tuxedo jacket and black pants, other times with a silvery black jacket and dark silver pants or in a classic tuxedo. 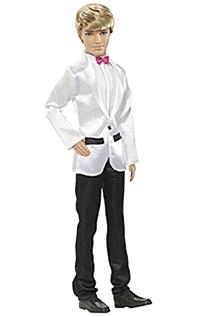 Bathing Suit Ken's abs are on display as he gets ready for the beach. With his primary-colored swim trunks with diagonal stripes and a towel, he is ready to have fun in the sun.

A Mermaid Tale Ken is also ready to dive into the ocean with his turquoise swim trunks. A pair of sunglasses is perched atop his head and he wears a classic shark tooth necklace.

Handsome Doctor Ken comes paired with Barbie in the exclusive I Can Be Doctors set. Ken is dressed in the traditional doctor scrubs and lab coat, with a stethoscope hanging around his neck.

In 2011, Mattel brought back the original Ken doll. This 50th anniversary doll is ready for the pool in his red bathing suit, sandals and towel around his neck. After a day in the sun, he can head to the dance in a blue blazer, crisp white pants and loafers.

Ken's closet rivals Barbie's with all of the different outfits and costumes he has. Whether you want to dress Ken up in a tuxedo or dress him down in shorts and tee, you can find the perfect outfit. Don't forget the shoes either, Ken has a large collection of those too. The selection of Ken clothes may be limited in the Barbie aisle of toy stores, but you can find a wide range of clothes for dressing up Ken online.

Classic Style for All Times

The Ken doll has undergone a multitude of looks and changes, mainly to fit in with the times and what was going on in pop culture. Whether you like him as blond, brunette, pilot, tennis star or disco-dancer, Barbie will always be glad to have her handsome date on her arm.