Video games are not just for older kids and they do not have to be just for fun. Introduced in 2003, the LeapFrog Leapster game system was one of the first products to combine handheld video games and learning basic skills. Appropriate for kids aged four to ten, your child will get a kick out of the portable video game style format, while learning essential educational skills at the same time.

About the Leapfrog Leapster

The Leapster is created by LeapFrog, a company that has been leading the way in educational toys for quite some time. LeapFrog's Leapster models are no exception, winning awards and appearing on popular toy lists.

The Leapfrog Leapster is bright green and comes with a stylus to work with the interactive touch screen. It also features control buttons on either side of the handheld system, fully capturing children's attention. This interactive player is handheld so children can get some learning time in wherever they go. The games are so fun and engaging, kids won't even know that they're educational.

Multiple games can be purchased to use in conjunction with the Leapster. Many of the games feature popular children's characters such as SpongeBob Square Pants, the Disney Princesses and Dora the Explorer. Each game is designed to help children learn a variety of different skills, including:

Most games are designed to appeal to children in preschool and early elementary school, but a few games also teach intermediate math skills, such as addition, subtraction and multiplication, that may appeal to children at the older end of the Leapster's four to ten year age-range.

In 2011, the Leapster Explorer earned a Toy of the Year Award because of its entertainment and educational value. This redesigned Leapster is not just a handheld gaming system. It also comes with a built-in camera for taking pictures and videos, and has a built-in game that allows kids to select a virtual pet of their own to take care of. As with the Leapster 2, parents can download games called Leaplets and track their children's progress using Leap World. Unfortunately, the Leapster and Leapster 2 games are not compatible with the Explorer, so parents must purchase new online games or cartridges. In addition to basic reading and math, games also cover science and geography skills. 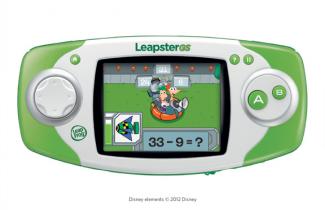 The LeapsterGS Explorer takes the Leapster Explorer to the next level. Not only do kids have access to over 300 downloadable apps, compared to the 40 or so apps available for the original Leapster Explorer, but the games are also more interactive than previous Leapster versions. With its motion-sensor technology, kids can get involved in the games they play by tilting, shaking and moving the LeapsterGS around to make the games respond. It also comes with more memory and a faster processor to help improve the speed of the games kids play.

Leapster games feature popular characters from Disney and Nickelodeon, as well as Leapfrog's own characters. Some games combine reading and math skills, while others focus on building a specific skill such as phonics or teaching a foreign language. A few games are also just for fun. Some games kids may enjoy include:

While you can still find the original Leapster online, you should expect to pay more than its original $40 price tag. It is currently listed on Amazon for over $100, with Leapster games priced between $7 and $20. Fortunately, the newer models are less expensive.

Even though it may be harder to find than the Leapster Explorer and LeapsterGS, the Leapster 2 can still be purchased for around $40.

Both the Leapster Explorer and LeapsterGS can be found in most large retail stores like Target. They may be priced anywhere from $30 to $60, depending on where they are purchased and what games are included.

LeapFrog continues to produce quality products that parents can trust. If you do not want to spend a hundred dollars or more on an expensive smartphone, tablet or one of the other popular handheld gaming systems, the Leapster is a good option. Unlike many game systems and other electronic devices, the LeapFrog Leapster is designed to be handled by children, which means it can withstand an accidental fall, being smeared with chocolate or left turned on for hours and still be ready to play the next time your child picks it up and wants to learn something new.

0
Comments
© 2006-2020 LoveToKnow, Corp., except where otherwise noted. All Rights Reserved.
What Is the Leapfrog Leapster?