They steal gold, fight with swords and don't seem to bathe very often - pirates have plenty of qualities that warrant respect from kids, and when it comes to your own youngster you may have experienced pirate fever at home. Popular movies like Disney's Pirates of the Caribbean series have only made pirates more popular and retail items are in abundance. Whether your little swashbuckler pretends to be a notable pirate like Captain Jack Sparrow or just relishes in the idea of going out for adventure on the sea, you can help encourage his imagination with a toy pirate boat.

Some pirate ships are twice the fun because kids have to build them before they can play with them. Through the process of building, they can also often customize the ship to fit their needs for more unique adventures on the high seas.

Box Creations' Pirate Ship makes your child feel like he the captain of a real pirate ship. Designed for children ages two through six, this cardboard pirate ship can be decorated with the accompanying markers and then assembled to create a large pirate ship children can actually climb inside. The ship is made of cardboard so it is possible for it to bend and tear, but it still earns high marks on Amazon.

For younger children, LEGO has a pirate ship made out of the bigger blocks for kids ages 2 to 5 years. They are also releasing a new line of pirate ships available after March 2015.

The K'NEX Pirate building set is designed for children ages 5 to 10. Kids can build a simple pirate ship model.

Through toy companies like Model Ships, you can order model pirate ships and many other boat vehicles that you can construct, paint and float. Some are usable toys while others are designed for display but all are fun to build and create with your own unique artistic flair.

Jake and the Neverland Pirates 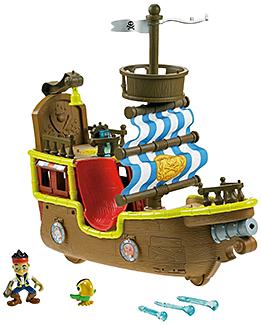 Disney Junior's series Jake and the Neverland Pirates is the inspiration for Bucky, Jake's Musical Pirate Ship, from Fisher-Price. Even if they are not familiar with the show, kids aged 3 through 6 will enjoy the ship and the pirate sounds it makes. It also comes with a spring-loaded cannon and a crocodile that pops out to keep the ship safe. While it receives good reviews from customers, a few parents point out that the ship is not designed to go in water and that the audio is awfully loud.

The Fisher-Price Imaginext Black and Red Pirate Ship looks like a serious ship and comes with two pirate figurines to help man the sails. While some children in the 3 to 8 year age-range may be scared by the black and red color scheme and some parents will be put off by the price, most parents appreciate the ship's life-like nylon sails and general durability of the product, giving it positive reviews. 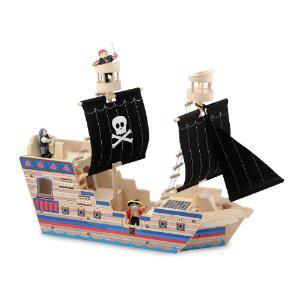 Melissa & Doug's Deluxe Pirate Ship Play Set is a wooden pirate ship designed for ages 18 months through 6 years, but comes with a small marble that presents a choking hazard for children under three. With the marble removed the ship can be a lot of fun and spur imaginative play. While durable and cute, it does not come with as many features as some of the other pirate ships designed for children in this age group.

Younger children will also adore the Playmobil Pirates Ship. Designed for children 4 and up, you can hoist your pirate flag, release cannons, throw an anchor and either float or drive the ship. Playmobil is known for its outstanding toy creativity and durability, and you'll be amazed at your child's imagination while playing with this toy pirate boat.

For older children and teens, the Barbarossa Pirate Ship is made out of wood which makes it extra durable and able to be passed down to future generations. With working cannon balls and figurines to walk the plank, this is an imaginative toy that also doubles as a great room decoration and pirate set for older kids who want something to admire more than play.

Even though many of these pirate ships come with fun features, such as the ability to fire cannons or play pirate songs, the real fun for your children is the imaginative play. With a toy pirate ship your child can go on a quest for buried treasure, fight other pirates on the high seas or simply enjoy singing a pirate shanty or two. They may want to dress up in pirate costumes and recreate fun pirate stories too. Jump in with your own "arrr" and "ahoy, matey!" and have some good old swashbuckling fun.