An immensely popular toy brand including action figures, movies and books, Transformers are a favorite among children ages 2 to 12. Each section of a Transformer can be changed to convert the car or animal into a robot, and back again. While the Transformer characters have primarily consisted of the good-guy Autobots and the evil Decepticons, many other versions of Transformers exist for children of all ages.

Transformers Beast Hunters were introduced in October 2012 as a new direction in the Transformers Prime television show. The Predacons, led by the Predaking, join the classic Autobots and Decepticons characters in the battle for control of Earth. This provides the Transformers series with new toys, characters and storylines for the franchise. This line is intended for children ages five and up, as it contains small parts that can be dangerous for younger children. Included in the Predacon line are:

The Bot Shots include two main factions in the fight for control of Earth, the Autobots and the Decepticons. This version of Transformers is featured in the movies Transformers, Transformers: Revenge of the Fallen, and Transformers: Dark of the Moon. Major characters include Megatron, Optimus Prime, Bumblebee and Ironhide. Some key Bot Shot toys and games include:

The Bot Shot line contains the most varied line of toys in the Transformers series with items varying from $10 to $59, depending on the complexity of the toy. 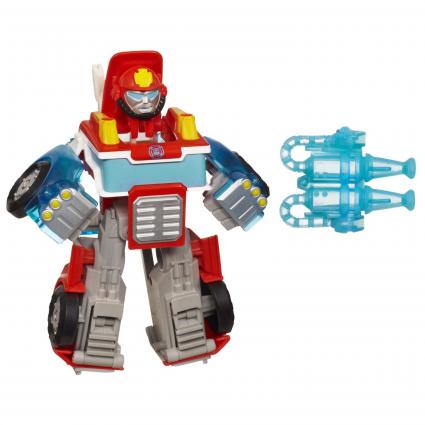 As the Transformers line has been featured for many years, older characters remain popular. The Transformers: Generations line features classic favorites, including Shockwave, Air Raid, and Jazz. These action figures are intended for children ages five and up, and can be purchased at most toy stores or online. Some popular items include:

Transformers: Generations toys and accessories are available at most toy stores or online, and vary widely in price from $5.99 to $59.99.

Transformer toys offer a wide range of options that can meet the age level and interest of any child. Age recommendations should be followed closely as some action figures have small parts that can be dangerous to small children, but many toys exist for younger ages as well. With books, action figures, Kre-O building sets, videos and video games, the specific interest of your child can be met with this interesting and fun toy line.