Peanuts characters plush toys not only make great collectibles but are also making a comeback as a popular children's toy. The Peanuts cartoon comes to life with these adorable plush toys from the past and present.

The History of Peanuts

Charles M. Schulz created the Peanuts characters in his daily comic strip back in 1950. In 1999, when Schulz retired, his daily comic strip was being published in over 2,700 newspapers worldwide. During the 1960's the Peanuts comic strip expanded into a worldwide business that included television specials, cartoons, plush toys, clothing and more. In 1965, the beloved holiday special, A Charlie Brown Christmas, aired on television. Each year children and adults make a tradition of watching the Christmas and Halloween Peanuts specials on T.V. Peanuts syndicated cartoons still air on Warner Brothers and the Cartoon Network.

For the first two years, the Peanuts cast included only Charlie Brown and Snoopy, his faithful beagle. Peanuts characters plush toys were soon made, with Charlie, Lucy and Snoopy being the most popular. Other characters include:

Other characters evolved in the early or later years of the cartoon and show and it is possib. It is possible to find plush toys in their likeness, especially Snoopy. 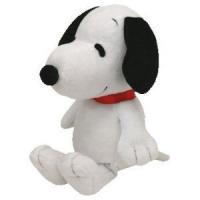 Snoopy was the first Peanuts plush toy, followed by Charlie and Woodstock. Later, Lucy and Linus joined the crew.

The original Snoopy plush toy came out in the late 1960s. An original plush Snoopy is worth anywhere between 25 to 100 dollars depending on the condition of the toy. The toy was soft and ultra cuddly with long floppy black ears.

Several stores are carrying the Peanuts characters stuffed toys again. You can find Snoopy, Snoopy's sister Belle, Charlie Brown, Lucy and Linus in these new ultra soft plush toys. A few of the original Snoopy plush toys, along with his sister Belle, are available with different outfits so you can have fun playing dress up and pretending. The plush Snoopy of today comes in several different colors; instead of just white and black, you will find pink, light blue and orange. Check out the following stores for authentic Peanuts characters plush toys: